I’ve just put together a selection of photos which captures something of our activities this year http://flic.kr/s/aHsjNYaZ3Y Seems like a good year, except for the passing of Madiba. We wait for his funeral tomorrow. I’m surprised by how much I’ve been affected. When I’ve had the time I’ve watched everything about him. While I was free and working in Cape Town, he was across the water locked up in Robben Island! I remember watching with the church that Sunday afternoon as he walked to freedom. I remember being at the Wembley Stadium concert to celebrate his release and felt privileged that he came to speak, and gave a powerful political message to the world. Awesome. Then there was the image of him shaking Francois Pienaar’s hand when the Sprinboks won the Rugby World Cup. Thank God for people like him. May he rest in peace.

Well this may be the last Christmas in the UK for a while! 2014 is all change. Yvonne keeps reminding me how many months I have left to work before retiring. It’s going to be a busy time. My successor comes on board in January and we have a couple of months overlap. I hope he doesn’t find things too incomprehensible!

We’ve been hoping her family would be able to visit in late May 2014, but her daughter Shu Fang （舒芳 – yes I can now write her name!) has just been offered a new job so won’t be able to come this time. Also Yvonne’s brother won’t be able to make it either so it looks like being a much smaller group than we had thought. Another of Yvonne’s good friends Liao Li Ping was here for a month and gave me lots of practice in trying out the Chinese I’ve been studying, but it didn’t work very well. Could we say ‘there’s room for improvement’!!!

I’ve been enjoying my Chinese classes. I moved to another language school in January and have made great strides. Previously I really didn’t know ANY Chinese characters. Now I’m supposed to know over 400. In January 2014 I move to the Lower

Intermediate class having been in the beginners class this year. If anyone is interested http://meridianchinese.com/ is the best I’ve been to yet. I wish I’d started there 3 years ago! I go 2 evenings a week and get lots of homework. I really need to spend most of my free time studying in order to keep up with the others (mostly young people in their 20’s).

We’ve both enjoyed good health though in the last month there have been warning signs that my left hip is starting to give out. I have an ‘annual service’ booked for my right hip in May – it’s been fine thankfully, even though it’s one of those large head, metal on metal ones that have been giving others some problems. I wonder when I’ll have to have the left one done?

The house here on Lyndhurst Road seems so quiet now. We had a delightful young couple Hector and Susanne here for the first six months of the year, and one month ago to the day, Wayne and Lois returned to the US after 5 years over here. Coffee times aren’t the same without you guys. And no more ‘house meals’. Miss you!

Both Yvonne and I have continued to enjoy the garden (hence the many photos of flowers in our annual album). A year ago I planted several roses and Yvonne took cuttings so since June we’ve enjoyed continuous colour. There are still a couple in bloom even now! I had some disasters with a ‘portable greenhouse’ that blew over in a gale killing off all the seeds I was propagating. Still, we’ve managed to have several hollyhocks, lots of primroses and a bleeding heart give us extra colour. We’re still hoping the camellia that I planted 18 months ago might flower in the Spring. Things are looking more hopeful as it appears to have plenty of buds which weren’t there last winter. We briefly met a young Japanese neighbour recently when the water got switched off on our street (since I’m British, it takes some sort of disaster before I start talking to people)! She said, ‘Oh, you must be the ones with the beautiful hanging baskets’. YESSSSSS! 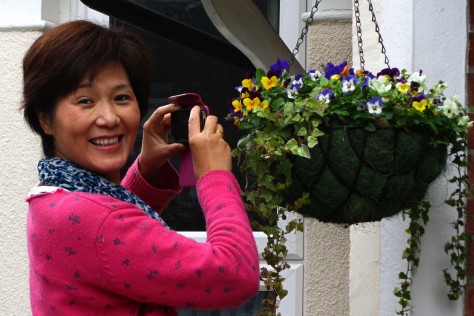 In the summer I managed to fulfil a life-long dream! Wayne and Lois, Yvonne and I took the train out to Kemble and took the short walk to the source of the Thames. Being summer and quite dry, there was no water to be seen, but it felt special even so. We revelled in being able to cross the river on dry land! I particularly wanted to go there after seeing that wonderful opening sequence to the Olympics entitled Isles of Wonder which traced the river from that point down to the Olympic site (http://www.youtube.com/watch?v=7tm7NWsxRRc). I’ve since learned that there’s an alternative source even further from the sea near Cheltenham, and it’s one that doesn’t dry up in the summer!

The year started off well with Yvonne being granted her indefinite leave to remain (expensive enough even before paying for the lawyers’ fees). Other friends have done it themselves but with the thought that if it gets refused, even for some small error in the application, we’d have to pay another £1,000 (approx) we preferred to get it right first time and get the help of a solicitor. We pray for friends currently awaiting appeals for the same thing.

Did you see the photo of ‘The Flowerpot Men’? We discovered them in the beautiful little village of Shere on one day out. On getting home I did a search on YouTube for them and sure enough there are several videos there. They’ve even go Muffin the Mule! Sorry, I’m showing my age here!

May God bless you very richly and may 2014 be a wonderful year for you all.