Had enough of Christmas letters?

Been listening to too much Lynne Truss on Radio 4?

Stop right now and toss it into the recycling bin. But I have a slideshow to bore you stiff:

But if you’re still there… it’s Wittering Time!!!

Latest first: Yvonne and I celebrated her birthday by a trip to the theatre to see The War Horse. I saw it 4 years ago with Liz and it was just as amazing second time around. It was nice to relax and celebrate having had the worry of getting Yvonne’s Indefinite Leave to Remain application in before her spousal visa ran out on 9th December. Now we twiddle our thumbs for 6 months to wait for the UK Border Agency’s answer.

Now back to January we had a month in China to celebrate her parents’ 80th birthdays. Changsha was cold and damp but Guangzhou near Hong Kong was

much more comfortable – but a day at the hot springs left me deaf in one ear for the next couple of months. We got to see the hole in the ground that will become our home in the future. We think it’ll be on the 8th floor but it was strange seeing the place covered in snow.

We had another move in April but due to advanced planning our friends did all the hard work for us as we were in Paris for a few days for my birthday when the moving van actually came around. Poor Yvonne has had to put up with 12 boxes still occupying our living room. They’re photo albums and CD’s so not things I’m going to throw out in a hurry. I have ‘this plan’ to digitise them but not much has happened on that front.

Other things I’ve not done include Chinese. Our classes were cancelled in May and I’ve not got my act together to book an alternative. I’ll have to do that in January. Yvonne has been working her socks off with her English and got her ESOL entry level 1 required by the UK Border Agency and is half way through her level 2. She’s decided to stop her classes which involved two early starts every week on top of working 6 nights a week from 6 p.m. to midnight, getting home at 1 a.m. She’s enjoying working in one of the capital’s top Chinese restaurants near Sloane Square (too expensive for most of us).

We were delighted to be able to get to Charlotte and Tom’s wedding in August in the beautiful setting of Merton College Oxford.

I stopped helping out at the kids’ skating club on Saturdays, something I’d done for probably 18 years. I was very touched when the club presented me with a crystal plaque to say thanks. I’ve now become very lazy and haven’t skated for a couple of months. I need to get some more regular exercise so I’m trying to walk to the shops instead of riding the bus.

I haven’t done much cooking at all for a long time, so my creativity is limited to making regular batches of ginger beer which has a rather nice kick provided by the yeast. I’ve also ‘enhanced’ some blackberries we picked in October. We went to our old stomping ground in Woodside Park which a year ago had the most amazing supply of sloes, but this year there were none. I’ve also ‘enhanced’ some raisons to go in the ice-cream we made this morning in time for Christmas.

Olympics? Awesome. We got to see Team GB women beat Brazil at Wembley together with 70,000 others. And that opening ceremony! I watched it again and again on YouTube.

Paralympics? Double Awesome. We got to the final athletics events on a glorious September Saturday evening at the stadium, with the final event being won by Oscar Pistorius. The crowd were on their feet from the start. It was amazing. I’m sure we’ll never get another chance of going to the Olympics. I was also treated to an evening at the Aquatics centre and got to see Ellie Simmonds and others. 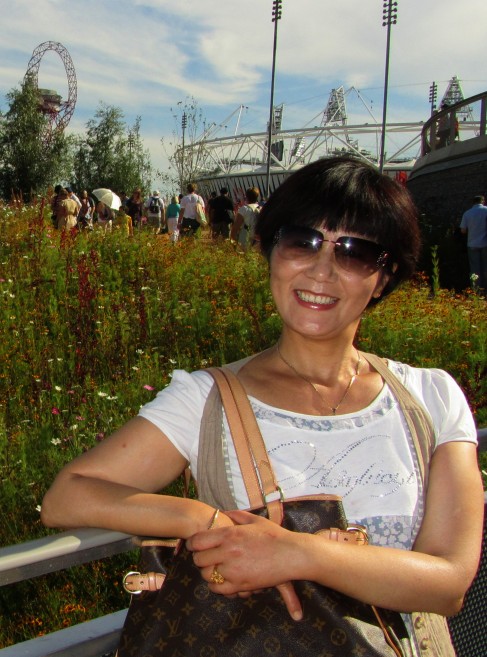 Lots of love to you all