Late again! And I don’t really have any excuses. I’m sitting beside my beautiful wife and am full of gratitude that such a wonderful woman would come into my life. We’ve now celebrated our wedding at least three times. Once at the Chinese registry office (http://tinyurl.com/27zbthr ) on 28 June where the legal stuff was done without friends or relatives in sight;

a second time the following Saturday (http://tinyurl.com/36bxteg ) surrounded by Yvonne’s family and friends in a nice

hotel down the road from her apartment; and last month (November) in the garden of the London Mennonite Centre. (http://tinyurl.com/2uujarp ) It was a sheer delight to have a time with my family and friends as well as a couple of Yvonne’s from Changsha. There were over 100 of us on a chilly winter’s day in a marquee heated by a couple of powerful gas space heaters. Thankfully the rain held off and we didn’t experience any of the snow that came along a week or so later. It was very much a ‘do-it-yourself’ affair although most of my family and friends were doing the ‘do-it-yourself’ bit, but I could not resist playing my guitar along with others in some of the songs. A huge thank you to so many who made it the day to remember that I had hoped for.

We had a couple of days away straight afterwards in Canterbury and because of the cold, spent most of it in the cathedral, two services on the Sunday and a walk around on the Monday. Our ‘real’ honeymoon was in the mountains of northern Sichuan province in a magical place called Jiu Zhai Gou (http://tinyurl.com/3x7o9s8 ) an hour or so west of Changsha by plane. The trip also included The Leshan Giant Buddha near Chengdu. I had never dreamed of such a romantic honeymoon. I had always imagined having a few days in a cottage down in Cornwall instead of seeing some of the wonders of China at UNESCO World Heritage sites.

One sad aspect of the London wedding was that it’ll probably be the last Mennonite wedding on the current premises. The building has been sold and we’re searching for new facilities that we can afford so there will be lots of changes and new beginnings by the summer of 2011. We all have to wait to find out what will turn up! Another ‘last’ is the probability that Viv and I have done our last Free Dance.

We competed in the ISU International Adult competition again in Obertsdorf, Germany, in May, and much to our delight came back with a medal. I was so pleased I sent the surgeon who did my hip replacement in 2009 a couple of photos and he was equally delighted to know that one of his patients was active again. But now I’m married I’ve cut back on my skating to two mornings a week which leaves insufficient time to polish any new 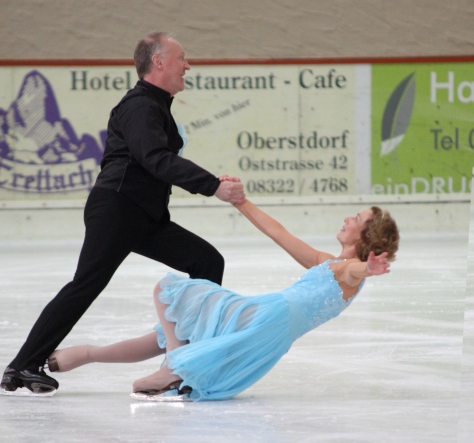 programme or keep my fitness up to competition standards. And to cap it all, Viv and I fell when doing a last run-through ‘for old time’s sake’ and again she came off worst with a broken breast bone. Sorry again Viv! (The photo is of the same manoeuvre – done in Obertsdorf – which had such disastrous results!)
With Yvonne coming over in October (having waited nearly 3 months for her visa – we have friends who waited 11 months for theirs!) I’ve temporarily stopped singing in the Highgate Choral Society. But I did join 200 of them and others for a ‘spontaneous’ Hallelujah Chorus in Brent Cross on Saturday 18 December which was tremendous fun. We even got 5 seconds on ITN London News that evening. YouTube has 3 videos with my favourite being

The church did some carols in Turnpike Lane tube station for a couple of hours the previous night. It was bitterly cold but a great venue for acoustics, but a bit of a strain on my vocal cords. My part in the following day’s bit of The Messiah probably suffered as a result! Many of us also joined others from local churches to sing carols in the local Whittington Hospital on Christmas Eve.

If you’re curious about the appearance of a fluffy doll in the shape of a German Shepherd that’s appears in lots of the wedding photos, I first came across him in Obertsdorf. Passing him in the shop twice a day he kept catching my attention. After 3 days I couldn’t resist him any longer. When I gave him to Yvonne in June, she immediately wanted me to give him a name. I felt lost for ideas until I remembered that my dad always chose German names for our pet dogs (why I haven’t a clue). Since Juergen Klinsmann was such a local star at Spurs football club and a great ambassador for Germany, our little fluffy friend became a Juergen too. OK, so I’m loosing my marbles!!!

You knew that anyway!