One of the very best comprehensive overviews I’ve come across.

Having had a dramatic spread of the virus following an outbreak in Nanjing Airport discovered on 20 July, affecting as many as 18 provinces, the last few days have shown a big drop in locally spread infections. 3 days ago there were zero new local infections, the first since July, and 3 or 4 in the last couple of days (not including imported cases limited to quarantine situations).

Some cities have had huge testing programmes. Yangzhou (4.4m) has been tested between 7 and 12 times (I’ve seen different reports). Yesterday’s 3 infections were all in Yunnan.

My city of Changsha has now been 24 days free of new cases.

It’s over two months since our beautiful princess, Miss Gege, crossed the rainbow bridge. Sigh. What a beautiful sweet girl. I miss her terribly.

But we have some new life in our home now. Not just one, but two!!!

About a month ago, a neighbour rang our doorbell. We’d not met before, but she found out about us at the estate office on the ground floor. She was looking for a new home for her daughter’s cat, since she could no longer look after it due to work travel assignments. So the estate office told her that there was a foreigner who loved cats on the 10th floor!

A small, two year old grey and white British Shorthair. A beautiful sweet thing but very shy and instantly bullied by the others. Now she’s found a hiding place on the balcony whether the others can’t reach her, so she’s there most of the time!

And just this week, ‘the management’ decided we needed another member of the family. This time a 3 month old, very gregarious grey and white British Shorthair. Mowgli has settled right in and seems to have appeased the others within a couple of days! He’s all bounce. Very Tigger-like!

17th April the family gathered at the countryside grave to lay Grandma’s ashes beside those of her husband. Here’s a short video of the procedings.

Enjoyed a wonderful 8 days driving up to Edinburgh 25 Nov – 2 Dec. The biggest disappointment was forgetting to take photos of everyone we visited!

Will & Yvonne are flying back to the UK on 20th October for 3 months and would love to get to see everyone. See our contact details on the sidebar.

WrittenChinese.com have published an article about us

It’s been a long time since I’ve had a pet. Not since childhood. And then the reality was that Mum took all the responsibility for our dachshunds. I just occasionally pitched in to help with ‘walkies’ in the park.

But soon after we arrived in Changsha, Yvonne and I got two lovely half-brothers to stay with us. British Shorthairs. Shu Fang gave us the first, Jack, and a couple of weeks later we purchased a second playmate for him in the shape of Billy.

For the first month or two we were worried about ‘our first-born’. Jack was small and skinny, his coat was short and thin, and his skin seemed to have some sort of eruption all over. He was not well and just wanted to eat and sleep. No playing with anything. When Billy arrived, though he was the same age, or just a few days younger he was already significantly bigger and was delighted to play with anything new he came across. And for the most part, he played – and bullied – Jack a little bit. Nothing serious, but it was fairly regular!

But as time went on, they both grew; Jack recovered and overtook ‘young’ Billy in terms of weight and size. He kept growing whereas Billy’s growth slowed. This didn’t seem to much of a concern to us. We knew Billy’s mother was quite small and he was still of a similar weight to his siblings.

But around a month or so ago his growth stopped, and so did his play. While he ate, he would then return to his bed and sleep – much like Jack had done in the early times. But he kept eating. We thought it was just a temporary state.

But after a couple of weeks he began to loose weight and become weaker and weaker. His appetite began to shrink.

We finally took him to the vet to get checked out only to discover that the poor little thing had liver problem and his prospects for recovery were slim. If we had come earlier then his chances might have been better.

Despite medication to fight infections and help strengthen his liver he continued to decline. Pills and food needed to be force-fed. Even liquids he turned away. For several days he did take a special milk formula but only finger by finger rather than be lapping.

My little Billy Boy was fading away. I spend hours beside him to let him know he was loved and making sure he was warm and comfortable – as best I knew.

Thinking that the end was near, we made another visit to the vet who could only offer to feed him intravenously, but it might already be too late. After a couple of hours it became clear that his diagnosis was correct and recommended that we bring dear Billy’s suffering to an end.

So Yvonne and I said our last goodbyes to this dear little boy and cried our eyes out. Even the breeder came along to say her goodbyes too. I held the little chap in my arms. Already too weak to move much at all. On the nod, the vet gave him is last injection and Billy was no more. No blinking, no movement, just slipped away.

Yvonne had a beautiful new collar to give him, so we dressed him in his new necklace. Wrapped in Yvonne’s old jumper we laid him in his own last box.

How he loved boxes. Both of them did. Their favourite toys. With Yvonne buying many thinks on the internet these days a new delivery meant something new to explore.

He loved coming onto our bed in the morning to wake me up and ask for breakfast. He’d enjoy having a snooze lying on my chest. He never wanted to lie beside us. Even during the daytime his favourite spot was on my lap. (Jack is not a lapcat)! Often he would curl up and get comfortable and then take a long look right into my eyes.

And such a beautiful little chap. Gorgeous thick soft coat. And still the same gorgeous look on his face despite being so weak. We visited the breeder the other day and his mum had different markings but the same shaped face. So cute.

A friend posted a little poem on Facebook from The Good Vet Guide which was sweet and aimed at a child experiencing grief for his cat. But it meant a lot to me, an aging 65 year-old.

To my dearest friend.
I stood by your bed last night; I came to have a peep.
I could see that you were crying you found it hard to sleep.

I spoke to you softly as you brushed away a tear,
“It’s me, I haven’t left you, I’m well, I’m fine, I’m here.”
I was close to you at breakfast, I watched you pour the tea,
You were thinking of the many times, your hands reached down to me.

I was with you at the shops today; your arms were getting sore.
I longed to take your parcels, I wish I could do more.
I was with you at my grave today; you tend it with such care.
I want to re-assure you, that I’m not lying there.

I walked with you towards the house, as you fumbled for your key.
I gently put my paw on you; I smiled and said, “it’s me.”
You looked so very tired, and sank into a chair.
I tried so hard to let you know, that I was standing there.

It’s possible for me, to be so near you everyday.
To say to you with certainty, “I never went away.”
You sat there very quietly, then smiled, I think you knew…
in the stillness of that evening, I was very close to you.

The day is over… I smile and watch you yawning
and say “good-night, God bless, I’ll see you in the morning.”
And when the time is right for you to cross the brief divide,
I’ll rush across to greet you and we’ll stand, side by side.

I have so many things to show you, there is so much for you to see.
Be patient, live your journey out…then come home to me.

Your mum and I loved you so much.

You will always have a special place in our hearts.

You gave us such joy and showed how wonderful your creator is. 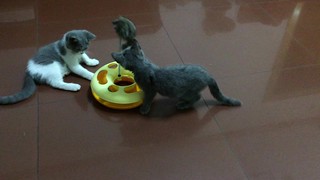